These days I feel more like Mr. Scrooge than Buddy the Elf. While I have no real disdain toward the secularized part of Christmas, in those immortal words of BB King, the thrill is gone. I’m not sure when it left or where it went, but the anticipation and excitement of the season was replaced with stress and responsibilities at some point.

I think part of the lackluster Christmas enthusiasm on my part is that the Christmas season is now 4 or 5 months long. In September, one of the houses up the street from me had garland and wreaths hanging on the iron gates out in front. The afternoon I saw it, the temperature was a very un-Christmas-like 95 degrees. The law of diminishing returns comes into play in that case for sure.

Another factor contributing to my apathy is that I don’t have any kids. I think to truly experience the Christmas magic, you have to see it through a child’s eyes. I’m a crotchety old geezer that has been jaded by taxes, bills, Donald Trump, and Ole Miss fans, so it’s not reasonable to expect me to pick up on the magic of a fat guy in a fur suit.

This past Sunday afternoon we had the first of this year’s family Christmas gatherings at my Uncle Larkin and Aunt Terri’s house (Larkin is Daddy’s brother). I was surrounded by my cousins and their wives and children. There was amazing food covering every inch of the kitchen counters. The tree, marooned in a sea of presents, was decorated meticulously, its twinkling lights bathing the foyer in a soft glow. (Honestly, I’m not sure if the lights were twinkling or if my eyes were playing tricks on me because I left my old man glasses at home.) The comforting sights, smells, tastes, and sounds of the gathering were familiar to me from Christmases past except for the newest addition to our clan, Larkin Lou, who’s only been around for 2 months or so. 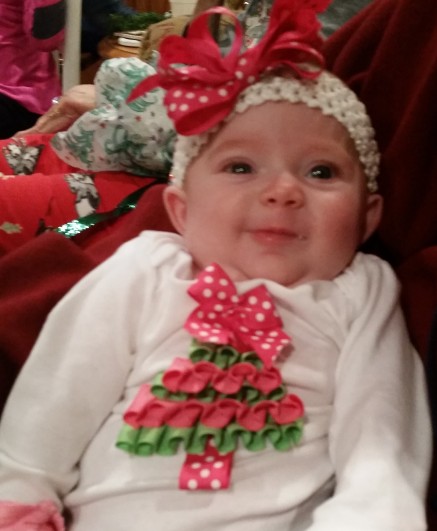 After we played a few rounds of Dirty Santa, where the Mike Tyson “Merry Crithmith” T-shirt I contributed was a hit, and we finished a great meal, the young kids got to open a few presents that were brought specifically for them. That’s where Christmas kicked me square in the mouth. Mom and Dad gave my little cousin, Logan, who’s about 3 or 4 years old, a remote controlled truck, and he loved it like it was the best thing he had ever seen.

Logan had to wear a brace because he fell and broke his collar bone.

He had no concept of steering the truck left or right, but he only needed forward and reverse as it turned out. Logan sent the blue plastic truck hurtling backward at full speed until it hit a chair causing him to squeal with laughter and jump as if it had run into him. Then, he moved the stick on his remote in the opposite direction, and the truck raced at full speed toward him until it ran into his Nana’s (Terri’s) feet. He jumped and squealed again with the same enthusiasm as before.

That little truck must’ve traversed the living room a hundred times, but Logan was in just as much awe of his new toy on its hundredth trip as he was on its first. His wide eyes twinkled with excitement, his mouth was slightly agape as he concentrated on the truck’s course, and his posture braced for the impact resulting from the next trans-living-room expedition. He was wholly consumed by the action taking place on the carpet in front of him.

As I watched him, I felt… something. The logjam of my indifference toward another in the long line of December holiday seasons began to come apart, and I felt the warmth of the holiday washing over me. The familiar, yet long shuttered, feelings of my childhood Christmas excitement were resurrected. All it took to scrub away the plaque deposited by years of adulthood on my feelings place was a blue plastic remote controlled truck and a cute little redheaded boy.

****Before anybody asks, I’m not about to have any kids. I like your kids just as long as you don’t stay too long and you take them with you when you leave. I also prefer that they be sleepy when you show up with them.

Merry Christmas! I hope your holidays are full, you are surrounded by family and friends, you are warm, you have a table full of tasty vittles, and you take the opportunity to express your love to those that matter the most to you. Also, remember that there are many that might not be as blessed as you. So, do something to show them that they are not forgotten. Let them see the Christmas spirit through you, because they might not come across a little redheaded boy and his blue plastic truck.

← Weekends with Maw and Pop
The view from my seat: your view of me →