I was having a progressively deeper conversation with a buddy the other night at $3 beer night at the local minor league ballpark. As we doled out solutions to most of the world’s problems, the subject came up of how kids view others who are different from themselves whether it be a physical, mental, or learning disability, socioeconomic status, or what have you.

My friend has a little boy around the age of 1st grade, and I promised to give him my baseball card collection. Now, if you were to ask the little dude about Mr. Robbie, he’d describe me as his dad’s friend that’s going to give him some baseball cards. He doesn’t seem to think much of the fact that I’m in a chair. To him, it’s just what I need to help me get around.

My experiences with most kids six and under are similar–minus the baseball cards. In fact, most kids I have an association with want to run up to me and get me to take them for a ride on my magical rolling recliner. When I got to see my best friend from high school last Christmas while they were home for a few weeks, his little boy who’s about four stood on my feet just about the entire time they visited with me. It was all I could do to fight him off from grabbing the joystick and laying down some rubber as we headed for the Chick-fil-a drive-thru. 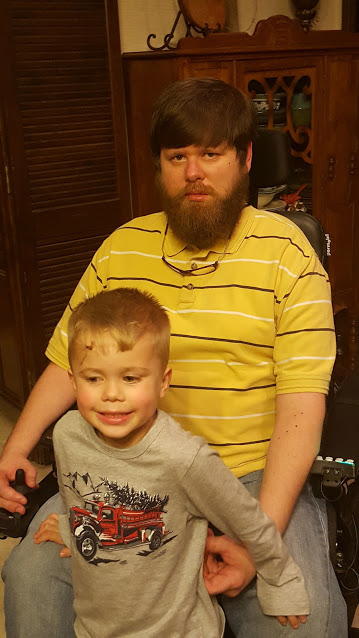 This made me think about adults’ reaction to seeing me. As I scoot around downtown Jackson’s sidewalks at lunchtime on sunny days, I pass lots of strangers, and I make a concerted effort to acknowledge them, tip my head, and say, “Hi. How’re you doing,” as we cross paths. Many folks recognize me as I’m pretty unforgettable. (Not many folks are as ruggedly handsome and sport a beard as awe-inspiring mine.) Most folks respond cheerfully, some look nervous and respond in a like manner, and some strain their whole being to avoid making eye contact with me. To those who avoid my salutation, I usually give them a silent Bless your heart after we pass. (If you’re not familiar with Southern vernacular, that’s sort of like a New Yorker saying fu…. well… let’s just call it an invitation to love themselves.)

Are kids today being better taught to accept human differences than my and older generations were? Is it simply childhood naivety? I don’t know. I hope it’s the former and that future generations will be more aware of others, have the tools to see someone’s worth as a person, and not be fearful or stand in judgment of those who are different from themselves in some way. It may be getting a late start for some, but we adults can take a lesson from them, now.