I’d just finished a couple chocolate chip cookies and was rolling past the phone on the wall by the kitchen door when it rang. Immediately, I knew there was bad news coming even though nobody had answered yet. Mom hopped up to grab it, and I continued down the hall as if I could run away from whatever it was. “How is he?” and, “What do I need to do?” were the two things I heard Mom say into the phone that let me know my premonition was accurate.

On his way home from Church yesterday morning, Pop’s vehicle was hit broadside and he was taken to the local hospital where the doctors and nurses worked to stabilize him for a long ambulance ride to Jackson. They’d hoped to fly him, but the weather wasn’t suitable. Then, a short while later we got a call saying they had him loaded in an ambulance and were headed to Jackson a little after 1 PM.

Mom and dad went to the hospital to wait for his arrival, but I stayed home to avoid the boredom of a waiting room. Once the doctors had time to work on him and he was able to take visitors, I was going to go see him. In the meantime, I decided to write a little bit to calm my anxiety. With David Letterman interviewing George Clooney on one monitor pane and WordPress open on the other, I found sufficient distraction to maintain a workable level of emotional stability. Then, dad called.

“Hey, Robbie… They were on their way down…”

That was all my brain would let me process of what he was calling to tell me. I frantically poked at the phone screen through my tear-blurred vision hoping to end the call before what was roiling inside me spewed forth. As soon as I managed to sever the connection, a guttural scream let loose from deep in my core as though I was casting out my own life force to somehow try to catch one more glimpse of Pop as he crossed through the pearly gate.

I always knew the day would come when I would lose him. No amount of realization or preparation could have prepared for the hurt and sadness that I felt right at that moment, though. It was palpable.

If for no other reason than therapy for me, I’m going to list a few memories about Pop that for one reason or another stand out to me. I may have told them before or some of you may remember the events differently, but I don’t care. These are my memories. Feel free to leave any happy memories you may have of him in the comments below. I would love to read them if you do.

This morning, I read something about how Heaven provides rest from life’s work. It seems to me that Pop was never happier than when he was working. I believe there’s a big shop and some cows out behind his house alongside the golden street where Maw is making lemon pies and waiting on Cecil to come in from playing on his tractors.

He was our Cecil, Daddy, Pop, and Mr. Crowell. 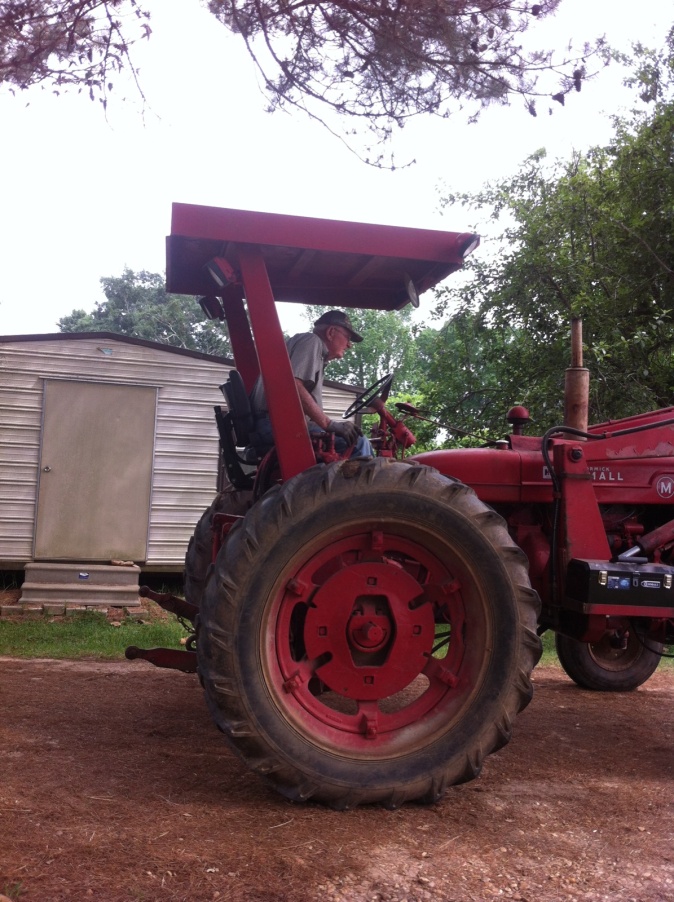 Pop on the Farmall M

← Why Do I Dislike Tom Brady?
I was the ballast and the hydration distribution engineer →

8 Comments on “They just don’t make ’em like that anymore.”